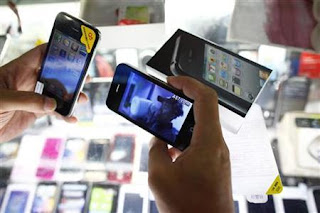 We knew China was the land of knockoffs and copycats where you could easily find an iPhone 5, even before the real iPhone 5 was out. It now appears that you can also find a real fake iPhone 4, exactly similar to Apple’s original device.


As the Chinese police busted this fake iPhone ring, they came across a group of individuals who purchased various parts in China, and assembled the real fake iPhones in their apartment…


200 real fake iPhones were found there, and according to the police, the fake models were identical to the real ones, except they had a shorter battery life. Even for an iPhone connoisseur, it’s hard to make the difference between the fake and genuine iPhone.
The cost to make those fake iPhones was about $313. They were then sold online or to shops in China for twice the price.

Do you think you could tell the difference between a real and fake iPhone?


Chinese police in Shanghai have arrested five people for making and selling fake versions of Apple Inc's iPhone, a local newspaper reported on Thursday.
Police said those arrested were part of an organized gang that bought components for the phones from Guangdong in southern China and assembled them in rented apartments in Shanghai, the Shanghai Daily said.
About 200 fake iPhones were found during the crackdown.
The cost to make one fake iPhone, which used some genuine parts, was around 2,000 yuan ($313). It was sold on unauthorized markets and on the Internet for around 4,000 yuan, only a few hundred yuan cheaper than the real iPhone, the newspaper said.
The fake iPhones had the same functions as the genuine ones but had a shorter battery life, it quoted the police as saying.
"It's really hard for customers to distinguish the fake ones from the genuine ones," an officer was quoted as saying.
Officials from Apple could not be reached for comment.
China has been repeatedly criticized for widespread violation of intellectual property rights, but pirated goods from expensive brands of watches, bags and computer software can be easily found in shops.
Various pirated versions of iPhones can also be easily found. 'hiPhone 5' phones, which are based on leaked images of the yet-to-be-launched iPhone 5, are being sold in markets and on the Internet.
An American blogger set off a media storm in July after she posted pictures of an elaborate fake Apple Store in Kunming, selling genuine if unauthorized iPhones, Macbooks and other widely popular Apple products.
Apple, which is expected to roll out the latest version of the iPhone 5 smartphone within a few months, sold a record 20.34 million iPhones worldwide during the last quarter, even though its newest model is over a year old.
Posted by Unknown at 11:02 AM