Panoramic video on the iPhone 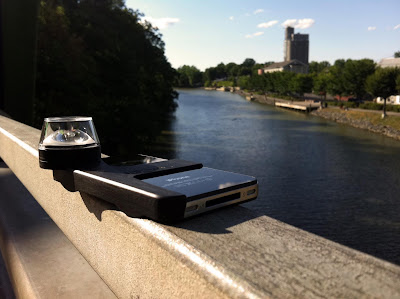 Dot, a hardware attachment for capturing panoramic video on the iPhone, starts shipping Tuesday after a short but storied development — one that began with the help of more than 1,000 backers on crowd-funding site Kickstarter in May.
Dot will also land on Apple Store retail shelves nationwide starting Nov. 1.
Dot, developed by New York-based startup Kogeto, is a compact $79 iPhone 4 or iPhone 4S video camera attachment — available in black, red, pink and green — that lets anyone shoot and share 360-degree shots.
This isn’t one of those piecemeal panoramic experiences weaved together via software; this is the real deal. And it works remarkably well, as Mashable witnessed first-hand in a live demo with Kogeto founder and CEO Jeff Glasse earlier this year. Dot is lightweight, and does not require batteries or recharging.
Snap Dot on to your device, use the accompanying Looker iPhone app, and start shooting panoramic video via a lens designed to capture 360 degrees of video. You can then share your complete-perspective captures, a.k.a. “Dotspots,” via Facebook and Twitter, or on Kogeto.com.
Dot represents the collective intelligence gleaned from Kogeto’s experience building Lucy, an advance desktop panoramic video camera designed for professional and educational use.
“We wanted … to put a panoramic capture device in everyone’s hand, and Kickstarter allowed us to do that,” Glasse explains.
Glasse started Kogeto and initially launched Lucy with his entire life savings. And while Lucy has been successful enough to keep the small company afloat, Glasse knew that Kogeto would need to take on more capital to turn the Dot prototype into a product that consumers could buy in stores. But he didn’t want to take on venture capital at the time.
Enter Kickstarter, the crowd-funding service making it possible for small startups like Kogeto to finance their dream products — just so long as the community believes in the mission too. Kogeto sought to raise $20,000 via Kickstarter to fund and produce Dot. More than 1,000 backers had a better idea: They pledged a total of $120,514.
“We started with a $20,000 goal and we were hoping to beat it … to raise $40,000. We raised $120,000,” Glasse says. “But more importantly, we knew there was a demand for Dot.”

Demand is right. Dot, says Glasse, has racked up thousands of pre-orders in advance of Tuesday’s official release date. The startup has netted relationships with online retailers anxious to sell the device and has already found favor with Apple, who will help distribute the device via its U.S. Apple Stores come November.
One of Dot’s first taglines — “Put down the camera. Enjoy the party” — best exemplifies the power of the petite device, Glasse says. “The idea is that you can put it down and you can have a non-inflected, non-contrived interaction with me where I might let my guard down and just be who I am with you.”
“This is one of those enabling technologies that’s almost hard to explain to people how many things it makes possible,” he adds.