iTunes Match now available to everyone! 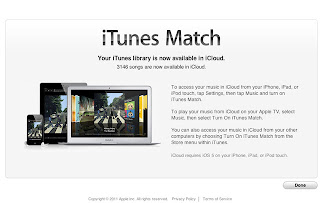 iTunes Match is now available and ready for sign-ups.

Apple introduced the service back at WWDC 2011; it's a way to access all your iTunes music via the cloud, for a fee.

Similar to Amazon's Cloud Player and Google Music, iTunes Match offers users the ability to access their music libraries — whether tracks were purchased via iTunes or not — from iTunes on a Mac or PC and from iOS 5 devices, including the Apple TV 2.

The service is $24.99 a year. For that $25, users can upload up to 25,000 tracks to the iTunes Cloud (past iTunes purchases do not count against that total) and access their tunes on up to 10 devices.

We've been playing with the service since it first hit beta and have watched it evolve from a promising — if buggy — tool into a well executed consumer-centric music solution.

After downloading iTunes 10.5.1, users can opt to enable iTunes Match. After paying the annual fee, iTunes will scan a user's iTunes library and upload or match the songs that it finds to its servers.

Apple has a catalog of more than 20 million songs, which means most users' existing albums and tracks will already be in Apple's database, drastically reducing the amount of time it takes to upload a library to the cloud.

Over the course of nearly eight years, I have downloaded several thousand songs from iTunes. Most of them are downloaded onto my iMac or stored on an aging hard-drive based iPod. With iTunes Match/iTunes in the Cloud, I have access to all of my past purchases in my library. Even if I haven't downloaded those songs to my MacBook Pro, the songs are still viewable and playable.

Playing back these songs can take place in two ways. First, I can just stream the song from the web, a la Spotify, MOG or Rdio. I can also opt to download a track to my hard drive.

I can also create playlists or smart playlists using tracks from my existing iTunes purchase library. On secondary machines, local uploads are accessible in the same way that my iTunes purchases are.

The experience is similar to what subscribers to services like Spotify have long enjoyed, but the difference is that now the songs I actually own (or have acquired in other ways) are included.

Playlist Synchronization
The iTunes Match/iTunes in the Cloud harmony really comes together with playlist synchronization.

You no longer need to manually sync playlists with your iOS device via iTunes — instead it all takes place over the cloud. That means my iPhone can see playlists I've created on my laptop or desktop.

The process works in reverse too. I can create playlists on my iPad or iPhone and then access those playlists from within iTunes on the desktop or from another iOS device.

Matching Songs with iTunes
After signing up for iTunes Match, the service will assess your library and upload tracks from your personal library into the iTunes cloud.

If Apple can find a song in its own repository, it just matches the song in place. For songs not available in Apple's servers, your own files are uploaded directly to the cloud.

Upload Complete
iTunes will tell you how many songs are available in the cloud. For $24.99 a year, users can upload 25,000 songs. Remember, past iTunes purchases do NOT count towards this limit.

Add to iCloud
After adding a new set of songs or playlist to iTunes, you can manually add a list to the cloud by right clicking on a track and selecting "Add to iCloud."

iTunes Match Settings iPhone
To enable iTunes Match on the iPhone, go to the Music section under "Settings."

You can choose to view just the songs that are locally on your device or your entire cloud library.

iTunes Match iPad
When you enable iTunes Match for the first time, iOS will warn you that your current song library will be replaced with iCloud.

Download Tracks From the iPhone
iTunes Match tracks are designated by the cloud icon. Tapping the icon will download the file locally onto your iOS device. Once downloaded, the track is available for offline listening.

Because everything is backed up in iTunes Match, you don't need to worry about keeping a copy of all of your playlists or albums on your iPhone or iPad. Instead, download the albums or playlists you want and remove them when finished.

For this test, I created a playlist of various Death Cab for Cutie tracks and albums from my iTunes in the Cloud account.

Playlist Syncing - Saved
This is the playlist as it appears on the iPad.

Playlist Syncing - iPhone
The same playlist is also accessible on my iPhone, no intermediary syncing required.

Playlist Syncing - Mac
Likewise, the same playlist is also available on my Mac in iTunes.

This is a great way to keep music organized across devices.

iTunes Match Browse
My entire iTunes library -- online and off -- as seen from my iPad.

High Quality Matched Tracks
Although most of my personal compressed musical files are stored in LAME V0 (~225-278 bitrate, depending on the file), I have accumulated some lesser quality tracks over the years.

By default, if iTunes Match finds a song in its library, it will replace that track with a 256-kbps AAC version. These files are DRM free when downloaded from the cloud — and appear to be the same files users purchase directly from iTunes.

For some users, having improved sound quality will be a big deal, though less discerning fans might not hear much of a difference.

Keep in mind Amazon also encodes its MP3s at at least 256kbps, so tracks purchased on Amazon.com, uploaded to iTunes, really just wind up changing from one format for another.

That's an important distinction; although the iTunes Match tracks are stored by iTunes, they are in the AAC or *.m4a format. Most MP3 players will play this format, but be sure to check if you want to sideload those tracks to another device.

Listening on the Go
If you want to listen to tracks from iTunes or an Apple TV 2 device, you can stream songs without local downloads. Listening to songs on the iPad or iPhone, however, will download a track (though it plays it during the download process).

It would be nice if there was a way to indicate if you want to save a track for offline listening or if you just want to stream tunes. The advantage of this download upon play method, however, is that if you are suddenly offline (like on the subway), you can still listen to tracks you've recently played on your device.

On the whole, iTunes Match stacks up well against the other services. Although Google Music is free during the beta process, we expect the company will charge $20 to $25 a year, just like Amazon and Apple. Amazon charges $20 a year for a 20GB Cloud Drive, but promises unlimited song storage.

Google limits users to 20,000 songs and iTunes Match is limited to 25,000 songs, not counting your existing iTunes purchases.

Unlike Amazon and Google, Apple does not have a browser-based music player. For some, this may be a deal breaker. For me, it's actually an advantage.

I find web-based music apps to be clunky in execution. It's why I prefer the designated desktop apps for subscription streaming services. It's also why I loathe using Amazon Cloud Player, because the process of getting songs into or out of my account is so tedious.

iTunes isn't perfect, but it handles track playback, upload and download with much less friction than a web interface.

Of course, the biggest difference between the services is mobile device support. Amazon Cloud Player and Google Music are both available via unofficial iOS apps, but there are native solutions available for Android.

iTunes Match is only accessible from iTunes or iOS devices. That means Android users are out of luck when it comes to cloud-based bliss. You can still offload songs to your phone, using programs like DoubleTwist, but the cloud-based options are iOS only.