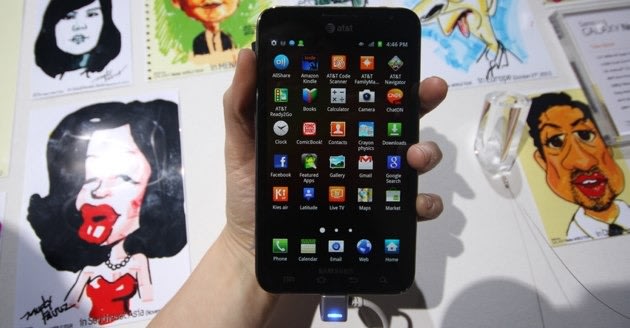 Tech lovers split over whether 5.3-inch Galaxy Note is just too much phone
When Apple introduced the iPhone way back in 2007, many consumers with tiny-screened feature phones wondered why they would ever need a huge 3.5" screen on a mobile device. Fast forward to 2012, and almost every new Android handset to hit the market pushes display size past the 4" barrier, and smartphone users have seemingly grown accustomed to lugging widescreen hardware with them wherever they go.
Samsung — the company behind the 4.65" Galaxy Nexus — has no problem pushing the envelope, and that's exactly what it did with the Galaxy Note. Sporting an almost laughable 5.3" screen, the gigantic 4G LTE phone could easily be mistaken for a tablet, and even Samsung's own marketing suggests it's meant to occupy both spaces. Its display is 51% bigger than the iPhone's, making it a challenge to hold for those with modestly-sized mitts.
The Note's split personality has also seemingly split the gadget community over how big is too big when it comes to a phone. Some of those who have laid their hands on it, including Tecca's own Taylor Hatmaker, are delighted with with the new tablet phone hybrid. In Hatmaker's own words: "The heavily marketed new member of the ever-growing Galaxy family is a 5.3" experiment in cross-breeding a phone and a tablet, and I for one really enjoyed the result."

Is the Note more to love, or just too big?And she's not alone. Engadget's Tim Stevens boasts "It's a device with a lot to love and is the kind of phone that would make almost every Android aficionado swoon."
But not everyone is on board with the trend toward massive handsets. Slate's Farhad Manjoo suggests that smaller is better, noting "A larger phone is more trouble to carry around than a small one, it's harder to hold and use with one hand, it usually gets worse battery life, and when you put it up to your ear, you're liable to get swept up by a strong gust."
Jonathan Geller of Boy Genius Report goes a step further, calling the Galaxy Note the "most useless phone" he's ever used, adding, "The phone is too big. You will look stupid talking on it, people will laugh at you, and you'll be unhappy if you buy it. I really can't get around this, unfortunately, because Samsung pushed things way too far this time."
It seems there isn't much middle ground on this issue; either the Galaxy Note will change your life for the better, or you'll regret ever considering purchasing a phone larger than a slice of pizza. But where do you stand? Is the Galaxy Note on your radar, or is Samsung's new megaphone simply too much to handle? Let us know in the comments!