What is the fastest browser running on a PC?


Here are all five major Web browsers through a gauntlet of benchmarks and time trials. This was hopefully to answer the question: which is the fastest browser on Earth at this time.

In order to test startup times, we set the test Web pages as the home tabs on each browser and loaded each site into cache before testing. The OS was reset and allowed to 'warm-up' before each iteration of the test. Times were taken using a stopwatch and measured in seconds. Timing began from the when I pressed enter on a highlighted browser icon, to the time that the browser reported the locally-saved and cached Web pages as fully loaded. I timed five runs, and used the average to report the final time.


The Google homepage was used as the test page for the Single Tab test. Bing, Hulu, Twitter, and Wikipedia round out the 5 Tab test. For the 8 Tab test, we brought in craigslist, Facebook, and YouTube from our Page Load Times benchmark. We had originally wanted to time ten tabs instead of eight, but Internet Explorer will only allow up to eight home tabs. 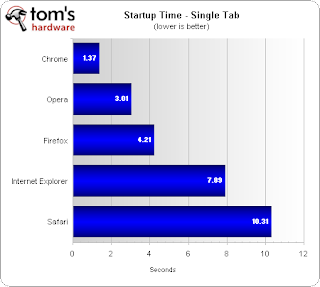 It's no real surprise that Chrome starts up faster than the other contenders. After all, a quick start-up has been one of Google's main goals with Chrome. The real surprise was how long it took Safari--a full ten seconds compared to Chrome's one second and Firefox's four seconds. 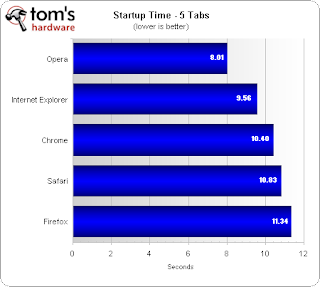 Opera rocks the five-tab startup test with Internet Explorer close on its heels. Chrome and Safari take third and fourth, while Firefox lags behind the pack to finish last. 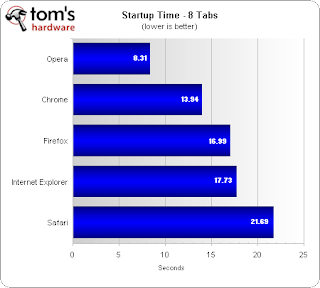 Once again, Opera loads the pages first, followed by Chrome, Firefox, and IE. Safari took double the time to open eight tabs as it did five. Since this is a stopwatch test, the 0.3 seconds longer it takes Opera to open eight tabs than it does five could very well be human error. Essentially, this means that those three extra tabs didn't even phase it - very impressive.