You Can’t Run from Your Shadow

In a world where time is a precious resource, we often draw conclusions without examining all the information that’s available to us. We rely on shortcuts, such as someone’s reputation, to simplify the process. Did the job applicant have a good reference? What did my neighbor say about the contractor? How was the restaurant review? In short, we place tremendous value on credible sources to help us make decisions every day.

What Are People Saying About You?
Your reputation is like a shadow, following you wherever you go. You can’t disguise it, you can’t hide from it, and you certainly can’t run from it. It will follow you for life. And although it’s said that you can’t be in two places at the same time, you actually do it every day — your reputation serves as your stand-in whenever you’re not around.

Your reputation can be your best friend or worst enemy. It can open doors to marvelous opportunities or ensure that every door is slammed right in your face. What does your reputation say about you? Does your “shadow” promote you as an upstanding individual or drag you through the mud?

A moving target. Your reputation is constantly evolving. Over time, the cumulative observations of your words AND actions form the basis of your reputation. And it’s not only what you do but also how others perceive your motives that often counts most.

Your reputation can be influenced by such behavior as:

Was your joke at the office party in bad taste?

How did you treat the employee after the infraction?

Were you tactful in lodging the complaint?

Do you get along with your peers?

Did you help your colleague when he or she was in a pinch?

How do you treat your pet?

Are you a fair-weather friend?

Do you play office politics?

Can you keep a secret?

Are you a team player or merely out for yourself?

How do you react under pressure?

Were you gracious in accepting the award?

Do you accept responsibility for your actions?

What do you stand for? Your reputation is much too valuable to treat casually. But if you don’t know what you stand for, you’re leaving it all to chance. Take 10 minutes to get to know the real you. When you look in the mirror every morning, are you happy with what you see? How would you define your values and core principles? What matters most to you in life? Are you the kind of friend that you’d want as a friend? How would you define the “ideal you” compared to the real you? If you were tasked with writing your obituary today, what three things best describe you? If you don’t like what you see, don’t blame the mirror.

Consistency is key. When your behavior is steady and reliable, your actions become predictable. This enables people to form an impression of you and anticipate future behavior. As time goes on, any deviation from your normal behavior is characterized as an anomaly or that you’re having “a bad day.” On the other hand, if your behavior is erratic and unpredictable, you’re sending mixed messages and leaving your reputation open to confusion and misinterpretation.

There’s no excuse. While it takes significant time and effort to build a solid reputation, you can destroy your standing in the blink of an eye. A flaming email, a sarcastic remark, a neglected “thank you,” or a missed commitment is all it takes. For the most part, people are very forgiving if you make an honest mistake or act out of character on occasion. But when improper actions — such as lying, cheating, or stealing — are repeated or intentional, however, your reputation suffers. Even if you offer a heartfelt apology after a transgression, it can still take considerable time and effort to recover.

News travels fast. In years past, reputations were formed primarily through word of mouth — and that continues to remain true today. The difference is that we’ve migrated from one-on-one conversations to social media (such as Facebook, Twitter, and LinkedIn), which spread news to thousands of people around the world at the click of a mouse. Furthermore, the Internet makes news permanent. Once bad news starts to snowball downhill, it can take a Herculean effort to slow the momentum. For that reason, nasty rumors and gossip must be addressed head-on before irreparable damage takes place.

Rome wasn’t built in a day. Many people ask if a tarnished reputation can be repaired. The quick answer is yes, BUT don’t expect to achieve success overnight. A tarnished reputation takes time and complete honesty to repair. The only way to mend your reputation is by rebuilding trust in small increments. Baby steps help others connect the dots and build bridges between your actions. On the other hand, aggressively trying to change your reputation often ends up doing more harm than good. Significant, “overnight” changes in behavior can defy credibility and cause others to be more suspicious than trustful of the “new you.”

Your Reputation Shadows You Everywhere
Protect your reputation like it’s the most valuable asset you own. Because it is! You can’t escape your shadow, but you can shape your reputation. Here are seven actions that you can take to build and defend your reputation:

Values matter. Operate with integrity at all times. Do what’s right. Period. That way, you’ll never have to look over your shoulder to see who’s watching.
Stand for something. People crave consistency and predictability. Maintain the strength of your ideas and principles.
Take pride in what you do. If you’re not proud of what you’re doing, either you’re not finished yet, or what you’re doing is not worthy of your best self.
Accept responsibility for your actions. If you wouldn’t be proud to see your words or actions in a headline, don’t say them or do them. If things go wrong despite your best intentions, don’t hide out. Face the music with an apology and your plan to do better.
Think before you act. Count to 10 before losing your temper, sending a flaming email, or making a caustic remark — or you may live to regret it.
Be a good-reputation ambassador. Help others build and sustain their reputations by acknowledging their good works, by modeling good behaviors yourself, and by never engaging in reputation assassination.
Let your conscience be your guide. Your character matters most when no one is looking.


People love their toys. They safeguard their precious cell phones, cars, and computers, even though they’re replaced every few years. Your reputation is uniquely yours and remains with you for life. Every time you make a move throughout your life, your shadow (or reputation) moves along with you. Sometimes it even stands in for you in your absence. Remember, whenever your name is mentioned or your presence is noted, your reputation is not far behind. Make it reflect well on you. 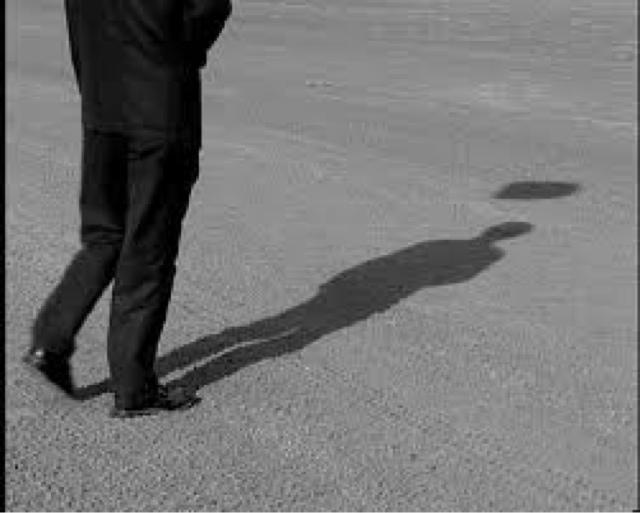 Email ThisBlogThis!Share to TwitterShare to FacebookShare to Pinterest
Labels: shadow, your