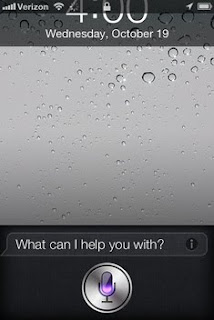 Security firm Sophos discovered and Mashable has confirmed that you can make calls (and more) with the voice activation service Siri, even when the Apple iPhone 4S is locked.

It could be an obvious security misstep for the Cupertino tech giant, or it's in fact an intended feature. In any case, this news will likely do little to slow the momentum of the iPhone 4S, which sold 4 million units in its first weekend available.

If you have an iPhone 4S, testing the security glitch feature is easy. Set up a passcode, which you'll find under Settings/General/Passcode Lock. Enter your new passcode (twice) and then lock your iPhone 4S by pressing the power button once.

Normally, to access your phone you would hit the home or power button, swipe the unlock arrow and then enter your four-digit passcode. In this case, tap the home button once, then hold it down to activate Siri. Alternately, you can simply hold down the home button and Siri will come to life asking "What can I help you with?"

Simply say "Call [Contact]". Siri will immediately access the phone's contact database and present you with dialing options. We dialed a number and completed a call with no issue. Now, it's important to note you can receive calls on both the iPhone 4 or iPhone 4S without unlocking the phone, so at least half this functionality is intended. On the other hand, this means anyone who finds your phone can access your contacts and perhaps look up phone numbers of your friends, family and business associates.

Siri will perform a variety of functions without unlocking the phone, including searching for local businesses, and searching for and playing music on your phone. She won't, however, search the web. When we tried to perform a web search, Siri told us, "I can't search the web while your phone is locked. You'll need to unlock it first."

We have reached out to Apple by phone and email and will update this story with the company's comments.

Update: Eagle-eyed Mashable commenter Drew Croley pointed out a setting under Settings/General/Passcode lock that will let you override the iPhone 4S's default settings. There's a toggle in there that says "Allow access to Siri when locked with a passcode." Switch this to "off" and Siri will no longer allow calls or any Siri interaction when the phone is locked. The only suggestion we might have for Apple is to have this as the default setting. Thanks again to Drew for the info.