Market share numbers and shipped vs. sold units can be deceiving and (too) often fail to paint an accurate picture of the mobile space. Heck, statistics can bend the truth and is frequently used to skew the realities and grab headlines. One of the most precise methodologies for measuring the impact of any given mobile platform includes tracking web browser clients in order to determine the number of devices in the wild being actually used. Net Applications, which collects data from the 40,000 sites participating in its network, and StatCounter, another mobile analytics service tracking three million sites, both published the latest figures for October.

The numbers show Apple’s platform increasing its web usage share, in spite of the reports describing the ongoing Android march and its ever-growing market share. According to Net Applications, web usage share for iOS devices has risen by seven percentage points to 61.64 percent share in the month of October. At the same time, Android grabbed just shy of one-fifth (18.9 percent, up from 16.9 percent) of web usage share.

The rise of iOS comes amid the October 14 launch of iPhone 4S, which sold four million units at launch and is in stark contrast with a modest growth in September. Interestingly, October also marks a milestone for Android, which for the first take recorded greater usage share than Java ME devices, which fell 12.84 percent from 18.52 percent.

Another takeaway: iOS’s lead in web page-heavy tablets is bigger than Android’s lead in relatively light usage smartphones. StatCounter uses a different methodology so their overall figures differ significantly to those of rival Net Application. More on that after the break.

StatCounter’s relative data shows iOS and Android tied in a neck-to-neck race with 23.48 percent and 22.11 percent usage share, respectively. Both, however, fell slightly during October as Symbian OS gained 1.79 percentage points. Per StatCounter data for top mobile browsers, Android (20.88 percent) is about to overtake Opera (21.52 percent) as the leading mobile browser. If we combine the iPhone’s and iPod touch’s numbers (18.78 percent and 4.58 percent, respectively), mobile Safari’s resulting 23.36 percent share beats Android or Opera (and it excludes iPad web share date). Another interesting factoid: BlackBerry usage share has dropped notably due to recent outages and subsequent conversions. Net Applications noted that the four day outage coupled with “a large number of Blackberry users switching to the iPhone 4S and Android” resulted in a usage share drop from 3.3 percent to 2.5 percent in October. 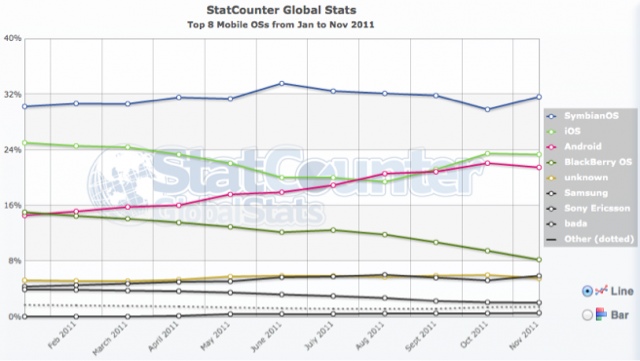 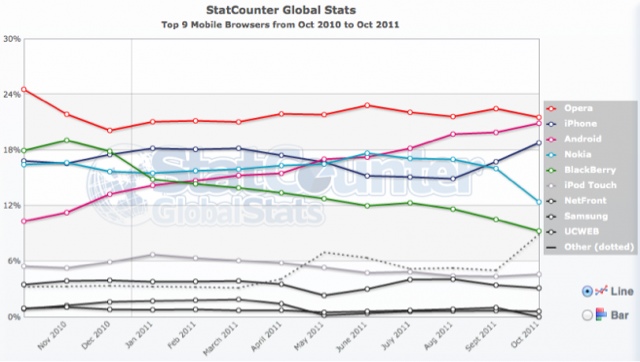 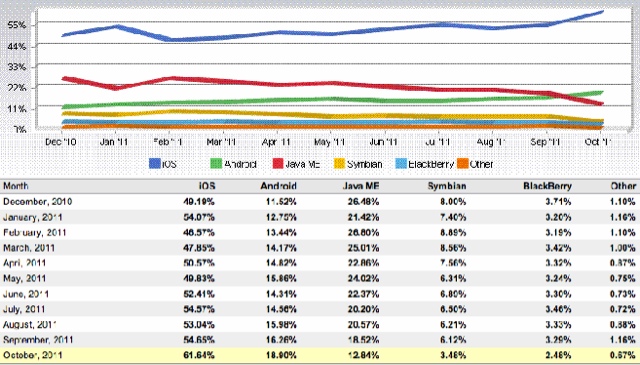